Working in an international setting, beyond the borders of my home country, has been one of my objectives in life. I thought it could be exciting as well as motivating, and keep routine and boredom away. In that sense I have not been disappointed. Along the way I came to enjoy the inspiring company of many remarkable and capable people of all creeds and colors. The physical environments were fetching too, from awakening third-world countries to major capitals where it all happens. To find common ground and shared purpose in such diverse international endeavors is a rewarding way to earn a living. With the UN it can be a good living too.

On the substantive level, I used to hold the opinion that large and sustained population growth is an avoidable source of much misery. The UN has been able to contribute to clarifying the underlying causes and to assist in turning the trend. This is despite many serious limitations and obstacles. The problem still is acute in certain regions of the world, but one could not accuse the UN, especially not the World Population Fund (UNFPA), of having stood idly by. More recently, the greying of societies and large migration currents have also become topics of great social significance. To tackle such issues from an international perspective, first by monitoring and then by formulating meaningful shared policies, is challenging and exciting work. I am happy to have left my own little footprint in this arena.

I have been involved with the UN since 1971, as a staff member and a consultant. This concerned assignments in the field as well as at head office locations. I worked long-term with demographic projects in Guinea, the Cameroons and Rwanda. Furthermore, I acted as a regional adviser with the economic and social commissions of Santiago and Bangkok, as a lecturer at the UN statistical institute in Tokyo, and as world-wide project coordinator and technical specialist at the Statistics Division of the UN Secretariat in New York. All of this was not the result of career planning, but more like stumbling from one assignment into another. By the time I approached the age of fifty and looked ahead to a perhaps less satisfying stretch of years at Headquarters, I found an opportunity to change course and become a private consultant. Among my several clients and productive personal network, the UN figured prominently. Over those many years I saw the organization expand tremendously, although much of that in its administrative and management functions. Local agency offices did grow beyond recognition. Meanwhile some parts of the UN itself and some of its staff became preoccupied with maintaining vested interests and privileges, perhaps unavoidably so. But the UN is still alive and kicking, it has not drifted into irrelevancy. That is in itself reason for mild satisfaction.

A banquet to remember

My most distinctive experience perhaps was participating on the UN’s behalf as a technical adviser in formulating and executing the first modern population census of the People’s Republic of China (1982), a big effort indeed. It marked one of the earliest major shared efforts of mainland China with the outside world. I won’t forget easily the introductory official banquet, with participation of large delegations from both the host government and the UN. That event evolved into a downright bacchanal, thanks to the jittery nerves of the delegation leaders. They continued dutifully alternating toasts, while challenging all those in attendance to a “bottoms up” (“ganbei”). We drank to international friendship, a successful census project, everybody’s individual health, the health of their spouses, their children and their children’s children. That could not end well; some officials started listing and then slipped dramatically from their chairs.

By the way, the Chinese turned out to be eager as well as smart students. They don’t need any further technical assistance and/or inquisitive onlookers in their statistical offices. 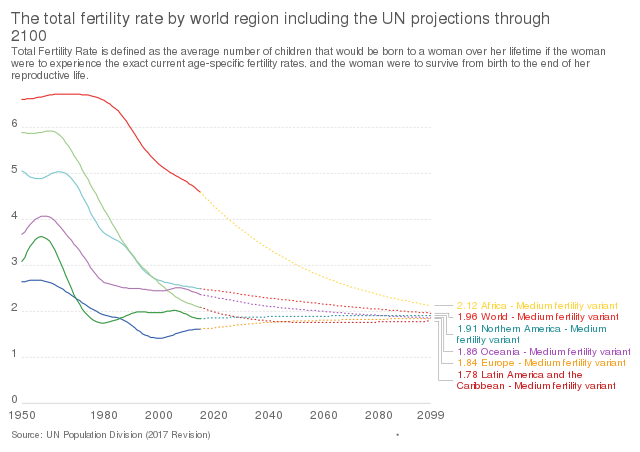 Photo: Total fertility rate – Number of children born over the life of a woman,
Photo Credits: Our World In Data, Wikmedia Commons

Not so long ago I took a similar role in Burma (Myanmar). The statistical methods and techniques had in the meantime developed greatly, but the delicate game of productively laboring together in a politically sensitive context still requires a fair amount of tact.

A less than perfect UN is better than none

The strength – and at the same time the weakness – of the UN lies in the absence of any alternative to it. Hardly anybody wants for the organization to cease to exist, as occurred to the League of Nations. A strong medicine for improvement would be to thoroughly thrash the organization and then start anew from a clean sheet – but that’s not going to happen. Therefore the current UN system needs to bring about other, less radical processes of renewal, while hanging on firmly to fundamental principles.

One of the essential elements will always be clearly evident opportunities for qualified persons from anywhere – no exceptions – to join the staff. Meanwhile our only broadly mandated and worldwide organization of nations will always remain a product of compromise, and thus makeshift to its core. Criticisms will continue to be heard from every sideline. But it remains an inevitable truth that a less than perfect UN is a whole lot better than none.

Since there is no competition for the position of the UN, and there really has not been since its inception, a danger of entrenchment in old habits is always there. It could lead to an accumulation of inefficiencies and an overestimation of its own judgements and capabilities. Some member countries – the US in particular – have called attention to this problem regularly, but the sincerity of their motives is not uncontested. Thus, reforms and adapting to new challenges must come also, and perhaps mostly, from self-evaluation and corrective action from the inside.

The UN is overburdened with an increasing number of specialized agencies and numerous and seemingly endless peace operations. In its present form and shape the system has simply become too large and dispersed. It’s a sad thing that in many national capitals there continue to be tens of separate UN offices, often equipped with flag poles and important-looking official vehicles for whoever is in charge. This is despite the “Delivering as One” initiative, which appears to have never got off the ground.

It would make sense to place the Secretariat at a greater distance from all this noise and to let go of a number of specialized agencies by removing their UN mantle.

At the same time those remaining UN activities that are found to be not, or no longer, part of the “core business” need to be down-sized or even completely discarded.

If this ever happens it will hurt, but the UN organization must be aware that its viability depends in essence on a credible record in undertaking the duties formulated in Chapter 1 of the Charter, notably maintaining international peace and security. That alone is challenging enough. Uncontrolled expansion will in in the end turn out to be self-destructive. Those who think differently I advise to open Google and query: “United Nations logo quiz”. The result is like – well – a downpour of sometimes rather obscure UN business.

I wish the UN a more convenient principal location than the costly and at times hyperventilating Manhattan area. The environment on this small island is too disjointed from the rest of the world. There is no compelling reason why the organization should be located at this hotspot: move to White Plains or Stamford! Or leave the US entirely – an attractive idea, although politically unthinkable.

I never seriously regretted my career within the ranks of the UN. Luck has been with me, in the sense that I was offered an initial post and then was assisted time and again by fate and friendly colleagues to proceed. A tolerant stomach was helpful too. Brussels sprouts were rarely on the menu.

“Commemorating seventy years United Nations: Citizens of the Kingdom of...

The United Nations at the age of 70

The United Nations at 70! Some personal reflections